Promoting education, conservation and recreation in the Sangamon River Watershed

Watershed conservation is the protection, preservation, management, or restoration of wildlife and of natural resources such as prairies, forests, soil, and water within the area of land that contains all the streams and rivers that flow into a single body of water. The Sangamon River watershed has its headwaters in McLean County, near Ellsworth, and flows roughly 238 miles until it reaches the Illinois River at Beardstown. The upper portion of the Sangamon River, upstream of Mosquito Creek is roughly 131 miles long and has a drainage area of 1,150 square miles. The lower Sangamon River, is roughly 107 miles long and includes the confluence of the two primary tributaries to the Sangamon River, Salt Creek and the South Fork.

The heart of the Sangamon: an inventory of the region’s resources 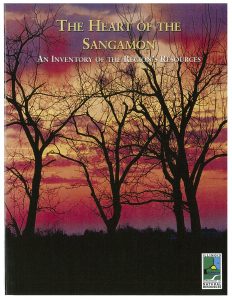 The Sangamon River meanders across central Illinois for more than 240 miles. Its waters accumulate in southeast McLean County and northwest Champaign County and eventually empty into the Illinois River near Beardstown. Near its headwaters, the gathering Sangamon is scarcely a river at all. In its lower reaches, which have been straightened by engineers, it is scarcely a natural river. In between is the heart of the Sangamon, and from Gibson City to its meeting with Mosquito Creek near Illiopolis, the river retains much of its character from the days before settlement. The heart of the Sangamon drains 1,220 square miles, most of it in Macon and Piatt counties. The countryside is part of a massive “till” plain that blankets most of east central Illinois. Till is the jumbled rock debris -mostly gravels, sands, and clays -left behind by glaciers. (Till can be seen locally along streams where erosion has exposed the subsurface.) The bulldozing ice ground down the high spots of the old landscape and filled in the low ones, so that the most obvious trait of today’s terrain is its lack of obvious traits.

Lower Sangamon River Valley : an inventory of the region’s resources 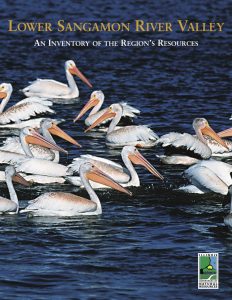 Some people arrive with shotguns, others with telephoto lenses. They are looking for birds, and the Lower Sangamon River valley is one of the best places in the state to find them. Its central location on the Mississippi Flyway, its diverse habitats and largely rural landscape provide homes or rest areas for nearly every species of bird found in Illinois. Of the 300 species of birds found regularly in Illinois, all except one can be found here; more than half of them breed in the region. The bird species include 30 that are listed by the state as threatened or endangered (T&E species). Local economies are boosted by bird watchers seeking migrant species and hunters seeking southbound ducks and geese. (Sanganois Conservation Area has the third highest annual average duck harvest in the state, with more than 3,600 ducks taken each hunting season.) While other fauna don’t come anywhere near the occurrence of bird species, they are fairly well represented in the region. At least 29 reptiles (four T&E species) can be found here, almost half the reptiles found in Illinois. Sixteen amphibians (40 percent of the state total) are known or likely to occur here; only one, the Illinois chorus frog, is state-listed. Also recorded are 100 species of fish (four T&E), 44 species of mussels (nine T&E and one non-native) and 18 large crustaceans. Of the 59 mammals found in Illinois, 47 of them are known or likely to occur in the Lower Sangamon region. The bobcat is found here, as are both of the state’s listed mammals: the federally endangered Indiana bat, and the state threatened river otter. The river otter had been lost from the region, but was reintroduced into the Illinois River and has been accidentally trapped in Quiver Creek in Mason County. Some mammals, like the badger and the western harvest mouse, are seldom seen; others, like the whitetailed deer, are so abundant that they may be having an undesirable impact on the vegetation. As for the flora of the Lower Sangamon, 1,476—almost half the plants recorded in the state— can be found here. Twenty-eight are T&E species and 337 are non-native species. As described here, the Lower Sangamon River valley includes the lower 107 miles of the river (from its confluence with Mosquito Creek east of Springfield), the Sangamon’s two major tributaries, Salt Creek and the South Fork, and several smaller tributaries. Together they collect water from almost 4,575 square miles of land and drain it into the Illinois River north of Beardstown. The valley also includes the east bank of the lower middle Illinois River, a 50-mile long reach between the Mackinaw River on the north, downstream to the SangamonRiver on the south. Overall, the area stretches from Bloomington-Normal in the northeast to the northern edge of Montgomery County in the southeast. Although portions of five natural divisions occur within the valley, most of the area lies within the Grand Prairie Division.

The Illinois Headwaters: an inventory of the region’s resources 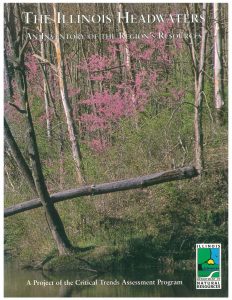 Just as the Grand PrairieIllinois’ namesake landscape- was the heart of the continent’s “Prairie Peninsula,” so the Headwaters area of east central Illinois is the heart of the Grand Prairie. It is one of the flattest parts of the state and is characterized by glacial topography, with the flat areas separated by glacial moraines that serve as drainage divides. This causes water to flow downhill in most directions, giving rise to six major streams, the Vermilion, Embarras, Sangamon, Mackinaw, Kaskaskia, and Little Vermilion rivers-that together drain almost a third of the state. As used here, the “Headwaters” refers to an area centered in Champaign, Ford, and Vermilion counties, and sprawling across parts of seven other counties.